Exposure Collective has been working with Edge of Seven, a Colorado based NGO dedicated to improving the lives of young girls in rural parts of Kenya and Nepal. We believe in the work they do and decided to send out a note to spread the word on their behalf for Colorado Gives Day. People from all over the US can give to @Edgeof7 tomorrow on @coloradogives day — this is a day of giving where donors make a big, real, significant difference to girls’ education. Your donation of any size not only supports #girlseducation but @edgeof7 in their mission of breaking down barriers for girls in remote and rural parts of the world.
Tags: education, Human Rights, non profit, WOMEN

As the sun was going down we crossed a river tumbling out of the foothills where local Malawian women were washing their crops in preparation for market. We immediately pulled over and after getting their permission began to document their daily chores as the sun began to glow a distinctive orange color I’ve only seen in Malawi.

On our assignments in Africa we’ve seen the challenges that people face producing enough food for themselves much less for market. As The World Bank recently reported, food production in sub-Saharan Africa needs to increase by 60 percent over the next 15 years to feed a growing population. But with technology and infrastructure improving those challenges are turning into opportunities. According to a recent CNN report, women across the continent are taking matters into their own hands, and kick-starting an enthusiasm for agribusiness among young people. Farming and food have helped them break down gender barriers and reap the fruits of success.

Jonathan Jones in his “Framing the Debate” series for the Guardian newspaper makes the case that images still have power even in a world awash in them. Read below to decide for yourself.

Pictures can change the world. There seemed to be little sympathy in Europe for refugees dying in the Mediterranean until images of the tiny body of Alan Kurdi, drowned as his family tried to reach Kos, impacted on hearts and minds last summer. The brutal death of one child can reawaken the conscience of a continent, thanks to the immediacy of a camera.

So why are the devastating pictures coming out of Madaya in Syria not having a similar impact? Photographs from this besieged city depict the stark reality of mass starvation. Children with barely covered ribs gaze at the camera. Emaciated corpses lie unburied. Yet the shocking visual evidence has not yet shaken the conscience of the world. It is just another sad story in the news.

It makes you wonder what it takes to project an image so deeply into the souls of strangers that it can change history. Pictures do have the power to shake us out of our passivity but this is not always so. The truth is that it does not happen often. The lightning of compassion strikes rarely.

The pictures coming out of Madaya are reminiscent of Don McCullin’s photographs of the victims of the Biafra war. In Biafra in 1968, as in Madaya at this moment, people were starving not simply because of drought or crop failure but as a direct consequence of war. McCullin was there to cover the war for the Sunday Times Magazine and he shocked the world with pictures of children visibly dying of hunger.

How much difference did McCullin’s pictures actually make? Before his and other images revealed that people were starving, the Nigerian civil war had not seized world attention. The emergence of these gut-wrenching images in summer 1968 led to a huge uproar of moral outrage in Britain and massive humanitarian campaigns by Oxfam and Save the Children. In France, the crisis led to the creation of Doctors Without Frontiers. The war itself went on – but images of Biafra did at last make the old colonial powers acknowledge Africans as fellow human beings and accept a duty of compassion, periodically rekindled by such pictures as Kevin Carter’s 1994 image of a Sudanese child apparently stalked by a vulture.

Long before McCullin went to Biafra, the great US photographer Walker Evans used the camera to campaign for a better world. Evans went to Cuba in 1933 to expose the crimes of its dictatorship and from 1935 to 1938 took a series of pictures of the victims of rural poverty during the Great Depression lodged themselves into the collective consciousness. Evans made America’s poor visible to America’s rich. Did his truth telling make a difference? His pictures provided powerful emotional arguments for Rooseveldt’s New Deal and changed America’s sense of its own identity forever.
The idea that an image can change the world even predates photography. The Victorian magazine The Graphic deliberately used art as a way to stir conscience. Its harrowing illustrations by such artists as Samuel Luke Fildes drew attention to the suffering of the poor and the brutality of workhouses. When photography started to be widely disseminated, the camera just gave this ability to depict reality and changes attitudes more immediacy. Social reformer Jacob Riis was anearly pioneer of this technique, capturing raw photographs of New York poverty designed to shame the city’s millionaires.
It seems that conscience is deeply associated, in our minds, with images. This goes back to Christian art in pre-modern Europe. Caravaggio’s paintingThe Seven Works of Mercy is just one of many Catholic paintings that portray poverty and injustice and urge the onlooker to do something about it.

Compassion, then, is not a new idea and nor is the power of images to awaken it. Artists like Caravaggio, Rembrandt and Hogarth all tried to use art to stir the world to act – and sometimes, like Don McCullin’s in Biafra, images really can make a difference.

This is why it is glib to talk of “compassion fatigue” or assume that people are numbed by images of atrocity. Last year’s mass change of heart showed how suddenly the lightning of conscience can strike. And yet the facts in Syria tangle compassion in barbed wire. Isis is not besieging Madaya, the Syrian regime is. So where does that leave us?

The long history of the power of images to stir empathy and action shows that anyone able to send pictures out of this starving city should keep doing so. It only takes one to change everything.

Looking back and forward

When we started out, Africa was a frequent destination because of the AIDS epidemic that was overtaking a generation. These photograph were shot during that time period when Kenya was especially hard hit by the disease. While the peak of the crisis has passed and AIDS is on the cusp of eradication in some parts of Sub Saharan Africa, the children who are now adults are still suffering the consequences of the disease. They’ve grown up without parents and sometimes have been expected to take on the task of child rearing while still children themselves. This boy, Mutuma, was one such child. While he worked this small patch of dirt his mother was dying of AIDS in the small shack behind him.

Girls education is an issue that needs attention all over the world and wherever we go it’s playing out to mixed results. The problem seems to be keeping girls in school as they reach puberty and breaking down social barriers to girls education, especially within certain cultures and religions. But in this private school in Uganda we witnessed girls learning right alongside boys in every grade level. The assignment was to show just that and to make sure that classes weren’t “assembled” for the cameras we arrived unannounced. As the students worked in this crowded room they did their best to ignore the camera. This girl in particular was hard at work and never looked up once and I’m glad. Because as she did her work we did ours and it was exactly the shot we were looking for.

When we’re working in places like Bolivia we spend a fair amount of time riding in vehicles looking out the window as we pass through the landscape. It just so happened that we traveled this one particular road more than once during our time in Bolivia and as we did we noticed this small farm by the side of the road. After a couple of days of driving by and seeing nothing but cows we decided to stop when we saw this couple out in the fields. This type of intrusion is never easy and I always imagine myself on the other side of the meeting and how I might react if a group of foreigners jumped out of the car while I was cutting the grass and asked if they could interview me and take some photos. I’m not sure I’d be as hospitable as the people we encounter all over the world who are generally more than happy to stop what they’re doing and tell you all about themselves. So as we talked across the language barrier it became obvious that the work needed to go on and so the woman turned back to her milking and ignored me as I photographed her doing her daily chores.

Another example of not knowing where the next image is going to come from but knowing that you never stop looking for it.

The heat was stifling as we crossed over to the Sunderban Islands. The only escape from the sun was under the low canopy of the small boat that jugged it’s way to our destination. The captain had been stoically piloting our boat out in the sun most of the morning. The rest of us had retreated to the shade under the canopy that provided shelter from the sun but at the same time provided a constant stream of fumes from the engine. Just as I was about to go back out into the sun our captain came over and sat in front of me. I’d been taking his photograph all morning but I wasn’t happy with what I’d gotten until he sat down and simply looked out at the water flowing by.

Exposure Collective created this video that summarizes Water for People’s global efforts to eradicate water poverty. All the footage was captured during numerous trips around the world in addition to still photographs that were used in their annual reports and other messaging/fundraising collateral. The goal was to tell their story succinctly and accurately without resorting to the stereotypical imagery of desperate, helpless poverty and making the case that success comes bit by bit.

Looking back at assignments that shaped our mission, one in particular really stands out. It was the late 90’s and we were shooting a feature about the AIDS epidemic in Kenya and it’s effect on families. We knew that the disease was devastating for women like Beatrice, pictured below, but what we learned during the assignment was the impact it had on the families of the dying as they struggled with not only the loss of the loved ones but also the burden of caring for their children. Often times grandparents found themselves caring for infants and numerous other children without the resources to do so and had to place them in orphanages thus creating another generation lost to the disease. 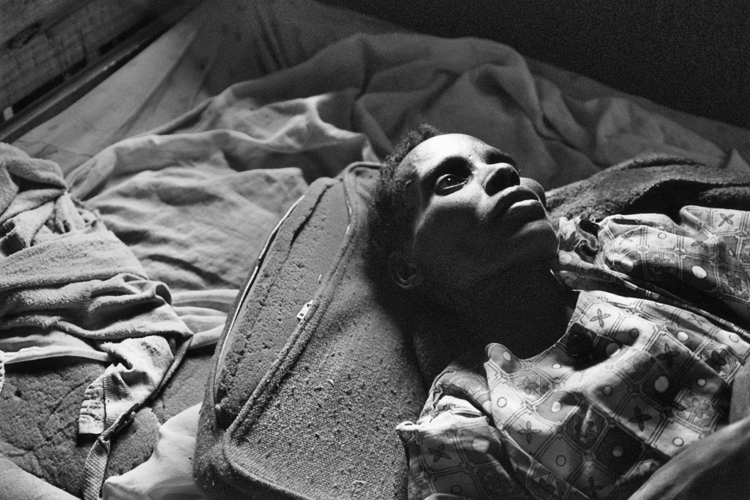 After a recent trip to Malawi shooting for the international NGO Water For People we dug a little deeper into the statistic that Malawi ranks near the bottom of the list in terms of world poverty. While the statistics tell one story we witnessed proud and enterprising people working toward a better life. The juxtaposition of the statistic with the sleeping child sums up how we felt during the assignment-tremendous challenges and tremendous opportunity.